From Hand to Mouth

The Euro Championship in football has started and the time shift robs me of my nighttime peace. That’s the peaceful period of the day that I usually like to spend writing. Fantastic, that the Lady of the house shows understanding and offered support with pen and paper.

Smiling insecurely our maid Geeta takes fork and spoon in her hands to eat her Spaghetti – most likely the first ones of her life. Almost admiringly she observes us handling our cutlery well experienced. For her it is not at all routine as she normally eats – like most of the people here in India – with her fingers. That on the other hand we find strange: Putting the meals into the mouth without any auxiliary means. 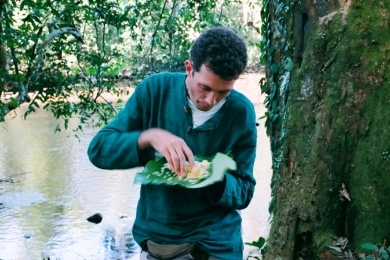 During our first stay in India I sometimes had „re-ordered“ the cuttlery as I felt inept and my eating experiments without cuttlery most likely counted for some exhilaration in my surroundings. Exactly this I now narrate to Geeta who tickles pink and meanwhile has almost finished her plate – with cutlery.

Eating without cutlery, only with the fingers? For you most likely a strange thought, and frankly speaking I can also hardly imagine that when it comes to German food. A sandwich, French fries or roasted chicken, yes, but everything and always? No, our food is definitely not qualifying. On the contrary, here most the dishes are literally made for that. The ingredients are always – regardless if vegetarian or non-vegetarian food – cut in such small pieces that you can comfortably place them in your mouth with your fingers. Rice is obligatory and qualifies like the Dhal – a stew made of pulses that is often used as gravy – perfectly for being eaten with the fingers.

When I was invited to our daughter’s school for Saraswati Puja the teachers had prepared Kijhuree for the guests – a mixture made of rice, dhal and vegetables. As I start eating with the spoon one of them tells me to use my fingers: „You will enjoy it more and it will taste you much better“, she says. I follow her advice and indeed it is really enjoying with all the senses. One can feel the consistency and the temperature of the food and it really tastes differently than when eating with a spoon.

Meanwhile it has become daily routine and a few days ago even our son has started eating independently, of course with his fingers. That after the meal the table, the floor and the little chap look like a mess was to be expected. And this is not at all bad, if you see how proud he is to have fed himself.

Ever since I had got the digital camera, I delete more pix than I would keep. But as well I shoot minimum ten fold the amount. I am floating in a sea of images, memories and events, all well stored on the hard drive. It is similar with writing. During train journeys I write with pen and paper. And then I often think how it must have been in former times, when the great brains have compiled their works. Striking through now and then, yes, but erasing entire pages or paragraphs? Working with the computer, a whole sentence is often only the fifth or the sixth try till finally it remains. Moving blocks from here to there, cutting parts and deleting others. Result is a surrogate of multiple trains of thoughts.

Are those the signs of a new time – the trial- and error age? The cutting and arbitrary pasting of the best ideas? And if that is so: Do I apply such methods in other fields as well? For example on holiday? Do I travel sometimes here sometimes there, and replace old memories with new ones, better ones? If ever I find an answer, most likely I will note it down in a train; well thought out.

In a What? In an area that is characterized by a significant diversity of species threatened by various influencing negative factors. A Biodiversity-Hotspot. The disturbance of the biological balance are mostly caused by a single species: The Homo Sapiens, as we are commonly called. That there are conflicting interests in a region where on an average thousand people settle per square kilometre is understandable. Some species manage to remain in awareness. Bengal’s pride, the Royal Tiger, frequently makes it into the media. After all it is the heraldic animal of India. And for tourists it even is part of the adventure that during the safari it is prohibited to descend from the jeep due to the danger of an attack. Tiger attacks on tourists are rare, elephants and rhinos are much bigger a threat. But many people live on the fringes of forest areas and the settlement areas are cutting deeper and deeper into the wildlife migration routes. Thus beastly visits are daily routine in many villages. And fights „eye to eye“ are not a rare happening – fear has its own rules.

But biodiversity doesn’t run out on the prominent flagship species. They are counting only for a evanescent part. In our place biodiversity can be experienced regularly in and around the house. The beginning of spring is the time of the dragon flies. Not the nice colourful ones that I remember from my childhood but rather dreary ones. They assemble in the evening around the sources of light – a thousandfold. Since it is advisable to keep shut the mouth during the homeward bicycle ride and the doors and windows of the house. Against the mosquitos besides the nettings on the windows and over the bed chemical appliances are quite striking. Whether electrical evaporators for the power soccet or as a creme for application on the skin, everything is better than being stung. And it helps: The anti-itching ointment tube is still firmly filled. Two colleagues report that in former times it had been much extremer. And not only in terms of midgets, generally less beasts roam around. In that sense we are lucky – somehow.

In Darjeeling I am part of a programme that has committed itself to the protection of the Himalayan Salamander. That creatures environs – small ponts and pools – is also shrinking. Canalisation relocates waterways and in a dried up pont bugs and vermins won’t breed – resulting in less amount of pricks. Thus the cute Salamander is not only losing its environ but its nutrition as well. This fate it shares with several other critters that are feeding on insects. And consequently the birds have to fly few extra rounds before they get something in their beaks. The little predators have to search a little longer before they spot a tasty winged animals. And the Tigers prowl a few extra kilometres to encounter prey. But – at least they have less stings.

Frankly – who hasn’t yet complained when in the room during the night to many and to disgusting visitors have been guests. Ants, cockroaches, centipedes. Especially in remote areas, often destinations of wildlife holidays, such room mates are not a rarety. The customer is king and which hotelier wouldn’t – hurt in his pride – diligently care for a bit more “privacy” inside its premises. And thus the guest will be service mindedly given besides the mosquito net a chemical weapon or the staff is trained in the use of it. How else can a guest well rested after a peaceful night go on a safari. Without prick, like the Tiger. That the latter is spotted ever more rarely increases the exclusivity of the holiday pleasure. And if one day the noble great cat cannot be spotted anymore at all the animal lover can shift to an alternative programme: In Vienna every year the fireflies are counted. Also an endangered species. But how I now can credibly communicate my rapturousness for butterflies, I’m still at loss with.